Craven County was named for William Craven, 1st Earl of Craven, who lived from 1606-1697. Craven County, originally included as a precinct of Bath County , was established in its present form in 1712. New Bern became its county seat in 1722, and was also the capital of the colony and first state capital until 1794.

At first, the land area of Craven County was very large, stretching WNW from the coast until 1746. This was the year when Johnston County was created, essentially cutting Craven in half with Johnston County taking the western part of Craven. In 1757, Beaufort County gained some of the northern area of Craven. It wasn't until 1778 that Craven again lost more territory, its southwestern section, to the newly created Jones County.

In 1770 Tryon Palace, seat of the royal governors was completed in Craven County. Following the Revolution, the Palace was used by four state governors, and visited by George Washington during his Southern tour in 1791. Because of its location, situated between the Albemarle and Cape Fear, Craven County grew in size and importance during the mid 18th century due to the significance of its county seat as a river port.

As Craven County moved into the 19th century, it continued to flourish as the developing railroad system served to further New Bern's commercial dominance, wealth and cultural sophistication.[1] 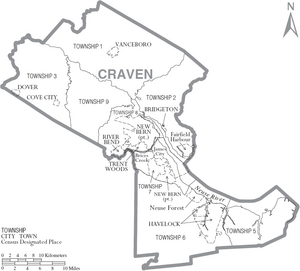