Cumberland County is a county located in the U.S. state of North Carolina. It is part of the Fayetteville, North Carolina, Metropolitan Statistical Area. As of 2000, the population was 302,963. Its county seat is FayettevilleTemplate:GR.

The county was formed in 1754 from Bladen County. It was named for Prince William Augustus, Duke of Cumberland (1721–1765), captain-general of the British army and victorious commander at the Battle of Culloden.

Cumberland County is a member of the regional Mid-Carolina Council of Governments. 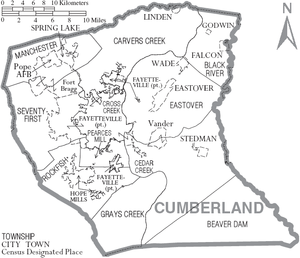