Henderson County is a county located in the U.S. state of North Carolina. It is part of the Asheville, North Carolina, Metropolitan Statistical Area. As of 2008, the population was 102,367. Its county seat is HendersonvilleTemplate:GR.

The county was formed in 1838 from the southern part of Buncombe County. It was named for Leonard Henderson, Chief Justice of the North Carolina Supreme Court from 1829 to 1833.

Henderson County, which in 1861 encompassed present-day Transylvania County as well, contributed 1,296 soldiers to the Confederate States Army out of its approximately 10,000 population, as well as 130 Union troops. (Figures from Terrell T. Garren's "Mountain Myth: Unionism in Western North Carolina, published 2006).

Henderson County government was centered around Hendersonville in the historic Courthouse (erected 1905) on Main Street, until this structure was replaced by the new Courthouse (c. 1995) on Grove Street.

The first rail line reached Hendersonville in 1879, ushering in a new era of access to the outside world. However, parts of the county had long been known as retreats, including the "Little Charleston" of Flat Rock, in which South Carolina's Low Country planter families had maintained second homes since the early 1800s.

A major land boom ensued in the 1920s, culminating in the crash of 1929, which severely deflated prices and left structures such as the Fleetwood Hotel atop Jumpoff Mountain incomplete. Population growth in the county has been rapid since the 1960s as a result of an influx from the North, with extensive housing developments now occupying areas that were formerly largely rural.

Other notable historic sites in Henderson County include the Woodfield Inn (1852), Connemara (final home of Carl Sandburg and originally known as Rock Hill, the home of CSA Secretary of the Treasury Memminger) and St. John in the Wilderness Episcopal Church. 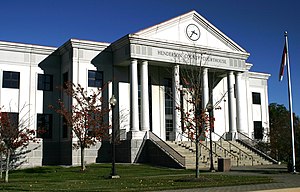 Henderson County is a member of the Land-of-Sky Regional Council of governments. It is governed by the five-member Henderson County Board of Commissioners, with Bill Moyer currently serving as chairman.

Henderson County is located in the Blue Ridge Mountains, but is situated in an intermontane basin formed by the French Broad River and its tributaries. The county seat is situated in a bowl surrounded by mountains. The lowest point in the county is to be found along the Rocky Broad River at approximately 1,200 feet, and the high point is located on Young Pisgah Mountain at approximately 5,200 feet. The county's major streams are the French Broad River, Mills River, Green River, Little River, Mud Creek, Clear Creek, Cane Creek and Hungry River.

As of the censusTemplate:GR of 2008, there were 102,367 people, 42,205 households, and 28,613 families residing in the county. The population density was 275.83 people per square mile (92/km²). There were 42,996 housing units at an average density of 115 per square mile (44/km²). The racial makeup of the county was 94.5% White, 3.3% Black or African American, 0.4% Native American, 0.8% Asian, and .9% from two or more races. 8.7% of the population were Hispanic or Latino of any race. The county contains a large but undefined illegal immigrant population, predominantly Mexican in origin, but also coming from other Latin American countries and also countries of the former Soviet Union and Eastern Europe. Undocumented immigrants living in Henderson County may number over 7000, but any estimates of this population are at best approximate. Interestingly, today Russian is the second-largest foreign language in use in Western North Carolina (primarily Asheville and vicinity), after Spanish.

There were 42,205 households out of which 25.6% had children under the age of 18 living with them, 54.1% were married couples living together, 9.9% had a female householder with no husband present, and 32.2% were non-families. 28.3% of all households were made up of individuals and 22% had someone living alone who was 65 years of age or older. The average household size was 2.33 and the average family size was 2.78.

Henderson County is located in the 11th Congressional District of North Carolina. The present incumbent is a Democrat, Heath Shuler. Both the Henderson County Republican Party and the Henderson County Democratic Party are active, and have their offices in the County seat, Hendersonville. In 2008, there was a vigorous election battle, which witnessed a Democratic surge in what has been historically a strongly Republican area. Possible reasons for this movement away from the Republican Party may include the large influx into the County in recent years of retirees and young professionals from outside the State, as well as the growing economic concerns of the County's largely rural population. 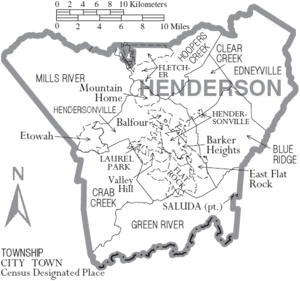 Henderson County currently has five incorporated towns/cities: Hendersonville, Fletcher, Flat Rock, Laurel Park and Mills River. Of these, only Hendersonville, the county seat, possesses the typical characteristics of a dense urban center with significant population. Mills River recently became a town. The other incorporations, particularly Mills River and Flat Rock, were created for the purpose of preserving specific cultural/historic areas, and to prevent annexation by adjoining towns and cities. Fletcher is the most "urban" of the remaining areas, but was also formed to avoid annexation by municipalities in adjoining Buncombe County.

Apples require extensive winter chilling, and do not tolerate summer heat and humidity well, so Henderson County, with its cooler climate due to its elevation represents about the southern limit for commercial apple growing. Apples have been the traditional agricultural crop in Henderson County, especially since World War II, but are today being superseded by land development (for housing and light industrial development). However, the tradition of honoring the local apple industry persists in the county's annual Apple Festival, held each year around Labor Day, and culminating in the "King Apple Parade" attended by tens of thousands of spectators.