Tyrrell County is a county located in the U.S. state of North Carolina. As of 2000, the population was 4,149, making it the least populous county in the stateTemplate:GR[1]. Its county seat is ColumbiaTemplate:GR.

The county was formed in 1729 as Tyrrell Precinct of Albemarle County, from parts of Bertie Precinct, Chowan Precinct, Currituck Precinct, and Pasquotank Precinct. It was named for Sir John Tyrrell, one of the Lords Proprietors of Carolina.

Tyrrell County is a member of the Albemarle Commission regional council of governments.

The county is divided into five townships: Alligator, Columbia, Gum Neck, Scuppernong, and South Fork - which are all part of the IBX - Inner Banks.

Tyrrell County was as of 2000 the least populous county in North Carolina.

The Tyrrell County Chamber of Commerce [2] is located in the town of Columbia. 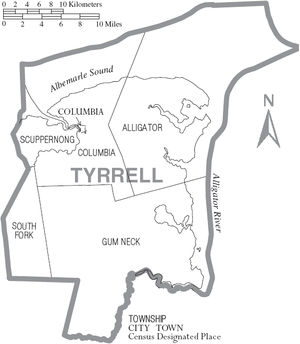