Caswell County is a county located in the U.S. state of North Carolina. As of 2000, the population was 23,501. Its county seat is YanceyvilleTemplate:GR.

Caswell County was formed from a northern portion of Orange County, in 1777. The newly formed county was named for Richard Caswell, Governor of North Carolina from 1776 to 1780. Leasburg was the first county seat. In 1792, roughly the eastern half of Caswell County became Person County. After the division, the Caswell County center of government was moved to a more central location: the community of the new county seat first was called Caswell Court House. Later, the name was changed to Yanceyville.

Caswell County produced many political leaders, including Bartlett Yancey, Jr., Archibald Debow Murphey, Romulus Mitchell Saunders, Bedford Brown, Calvin Graves, John Kerr, Jacob Thompson, and others. At one time it was stated that all successful North Carolina legislation had to make its way through the Caswell County legislators. As an example, Bartlett Yancey, Jr., was Speaker of the North Carolina Senate 1817-1827, and during part of this time Romulus Mitchell Saunders was Speaker of the North Carolina House of Commons.

It was in Caswell County that the Slade family discovered the bright-leaf tobacco curing process that revolutionized the tobacco industry and brough great wealth to the region.

For more on the history of the area see Caswell County History.

Caswell County is a member of the regional Piedmont Triad Council of Governments. 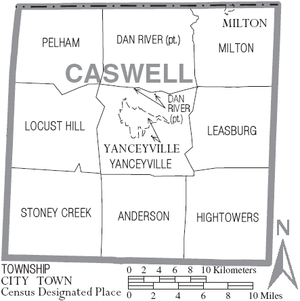 Milton is believed to be the only part of North Carolina with a small Amish and/or Mennonite population.