Ashe County is a county located in the U.S. state of North Carolina. As of 2000, the population was 24,384. Its county seat is Jefferson.Template:GR

The county's main river is the New River, which is one of the oldest rivers in the world, and one of the few major rivers in the United States to flow north instead of south, east, or west. There are 34 recorded creeks and streams that flow into the New River in Ashe County. In 1998 the river was designated an "American Heritage River" by President Bill Clinton, and it is famed for its beautiful rural scenery, clear water, fly fishing, and kayaking and canoeing.

Ashe County generally is known for its mountain scenery, and the tourism industry is an important mainstay of the county's economy. The Blue Ridge Parkway runs along the county's southeastern border. Ashe County has historically consisted of rural farmland, with numerous cattle and poultry farms. However, cattle farming in recent decades has given way to the more profitable industry of raising Christmas trees. Many cattle farmers have switched to growing Christmas trees, and in 1997 and 2007, an Ashe County Christmas tree was selected as the official White House Christmas Tree by the National Christmas Tree Association. The tree was put on display in the Blue Room (White House).

The racial makeup of the county was:

2.42% of the population was Hispanic or Latino of any race. 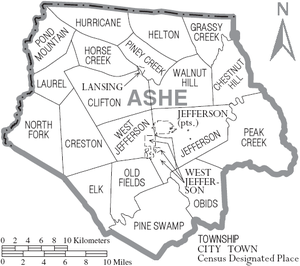 Municipalities in Ashe County include Jefferson, Lansing and West Jefferson.

The earliest Europeans to explore Ashe County were Bishop Augustus Gottlieb Spangenberg - head of the Moravian Church in America - and his associates, Timothy Horsefield, Joseph Mueller, Henry Antes, Johan Merck, and Herman Loesch. Bishop Spangenberg wrote about his journey in Ashe in a diary that has been preserved by the Moravian church. He was given 100,000 acres (400 km²) in Virginia as a place for his fellow Moravians to settle. The only one of Spangenberg's group to return and permanently settle in Ashe County was Herman Loesch. Other early settlers were David Helton, William Walling, William McLain and Daniel Boone, the famous pioneer. With the exception of Boone, these men and their families all settled in Ashe in 1771.

During the Revolutionary War one skirmish was fought in Ashe County. It is called the "Battle of the Big Glades". The battle was fought in July 1780 between a force of Americans, led by Captain Robert Love, and a force of 150 British Loyalists on their way to Charlotte to join Lord Cornwallis, the British commander in the Southern colonies. The Americans won the skirmish.

Ashe County has produced, or been visited by, several prominent people. Among them are Monte Weaver, a famous baseball player, who pitched for the Washington Senators and pitched a World Series game in 1933. After being traded from the Senators, he pitched for the Boston Red Sox, before being called into service in World War Two. Weaver died in 1994. Helen Keller visited an Ashe County native, Marvin Osborne, in 1944 when he was wounded in France in World War Two. Loretta Lynn sang at the Central Food Market in West Jefferson in the 1940s. (The Central Food building formally housed a locally owned auto parts store, but is now vacant.) In 1998, then-President Bill Clinton and his Vice-President, Al Gore, held a ceremony on the banks of the scenic New River to designate it as an American Heritage River.[1] After the ceremony, both men had lunch at the historic Glendale Springs Inn, also located in Ashe County.[2] Fiddle player G. B. Grayson was born in Ashe County in 1887.[3]