Camden County is a county located in the U.S. state of North Carolina. As of 2000, the population was 6,885. Its county seat is the community of CamdenTemplate:GR. Camden County is the first and only consolidated city-county in the state. It is part of the Elizabeth City, North Carolina, Micropolitan Statistical Area.

The county was formed in 1777 from the northeastern part of Pasquotank County. It was named for Charles Pratt, 1st Lord Camden, who had opposed the Stamp Act. The county is the site of the southern terminus of the Dismal Swamp Canal and was the location of the Battle of South Mills on April 19, 1862 during the American Civil War which brought a minor victory to the Confederacy.

Shiloh Baptist Church, founded around 1727 by Paul Palmer is the oldest Baptist church in North Carolina,[1] located in the Shiloh township.

Though technically there are (or were) no incorporated municipalities in Camden County, the county nonetheless became the first consolidated city-county entity in North Carolina in June 2006.[2]

Camden County is the location of Blackwater USA's Blackwater Lodge and Training Center.

Camden County is a member of the Albemarle Commission regional council of governments.

The county is divided into three townships: Courthouse, Shiloh, and South Mills. 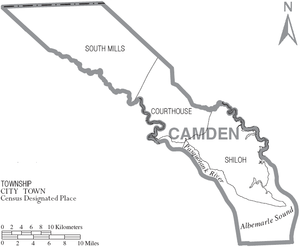 There are five schools in Camden county: Grandy Primary School, Camden Intermediate School, Camden Middle School, Camden County High School, and CamTech High School. However one other former school lies in Shiloh. It was a community school for the Shiloh area. The school is now home to a general store with the Topside Restaurant on top. The Shiloh School sign is still visible on the top of the facade at the front of the building.