Avery County is a county located in the state of North Carolina. As of 2000, the population is 17,167. Its county seat is Newland.

The county was formed in 1911 from parts of Caldwell County, Mitchell County, and Watauga County. It was named for Waightstill Avery, a colonel in the American Revolutionary War and the first Attorney General of North Carolina (1777–1779). Avery County was the last county created in North Carolina. It is often noted for the large amount of Christmas trees that the county produces. "A History of Avery County" was published in 1972 by Horton Edward Cooper. In it he noted:

Avery County is a member of the regional High Country Council of Governments.

The county is known for its production of Fraser Fir Christmas Trees. 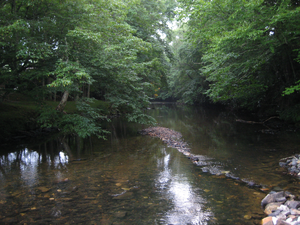 Stream within a Linville community

According to the U.S. Census Bureau, the county has a total area of 247 square miles (640 km²). Avery County is extremely rural and mountainous with all of the county's terrain located within the Appalachian Mountains range. The highest point in the county is Grassy Ridge Bald, which rises to 6,165 feet (1,879 m) above sea level. Most of Grandfather Mountain (whose highest point is Calloway Peak 5,964 feet (1,818 m) shared with Watauga and Caldwell counties) is within Avery county. At an elevation of 5,506 feet (1,678 m) above sea level, Beech Mountain (also shared with Watauga county) is the highest incorporated community east of the Mississippi River. At an elevation of 3,606 feet (1,099 m) Newland is the highest county seat in the Eastern United States.

As a result of its relatively high elevation, Avery County enjoys considerably cooler summers than most of the rest of the Eastern US. Likewise, winters are longer, colder and snowier than most other locations in the region. This can be evidenced by the snow skiing areas which operate in the area. Banner Elk, NC Historical Climate Summary 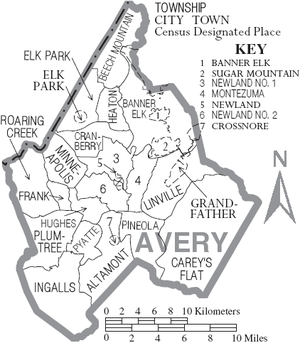