Clay County is a county located in the U.S. state of North Carolina. As of 2000, the population was 8,775. Its county seat is HayesvilleTemplate:GR.

The county was formed in 1861 from the southeastern part of Cherokee County. John Covington Moore was the first white settler in the region. It was named for Henry Clay, famous American statesman, member of the United States Senate from Kentucky and United States Secretary of State in the 19th century.

Clay County is a member of the regional Southwestern Commission council of governments.

Clay County is bordered to the south by the state of Georgia and the Chattahoochee National Forest. The Nantahala River forms part of its northeastern border. The county is drained by the Hiwassee River. In the southern part of Clay County is Chatuge Lake, on the North Carolina-Georgia border. Much of Clay County exists within the Nantahala National Forest. Fires Creek Bear Reserve is north of the township of Tusquittee 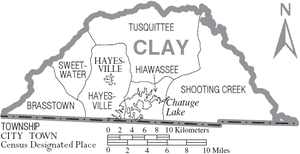