Catawba County is a county located in the U.S. state of North Carolina. As of 2000, the population was 141,685. Its county seat is NewtonTemplate:GR and its largest city is Hickory.

Catawba County is part of the Hickory–Lenoir–Morganton Metropolitan Statistical Area.

The county was formed in 1842 from Lincoln County. It was named for the Catawba tribe of Native Americans, who once inhabited the area. At the turn of the century, gold mining was a successful industry in Catawba County. The county was part of one of the largest gold producing areas in the entire country. North Carolina maintained its leadership in gold production until 1848 when it was overshadowed in importance by the great rush to California.

In the 1940s Catawba County was recognized nationally for the courage of its people in conquering a polio epidemic. In 55 working hours, people joined together to turn a youth camp into a hospital.

After the Civil War Catawba County began an annual event to honor it military, the Old Soldiers Reunion. It has evolved into a large festival held the third week of August, and is the oldest continuing patriotic celebration in the United States.

In 1992 Catawba County celebrated its Sesquicentennial Anniversary. The Sesquicentennial Planning Committee adopted the County's theme, "Keeping the Spirit Alive Since 1842!" In conjunction with this celebration, the County held a flag designing contest which was won by Rosemarie Hefner. The new design was made official by the Board of Commissioners and the first copies of the flag were made by Maxine Weeks of the Catawba Flag and Pole Company. The flag was raised on January 26, 1992 during a special ceremony at the Government Center in Newton.

Catawba County's history is a history of spirited people. With a spirit of rebellion Catawbans split with Lincoln County; a spirited people united and fought a major polio epidemic in the 1940s; an entrepreneurial spirit built a thriving economy; a patriotic spirit resulted in the oldest continuing patriotic celebration in the USthe annual Soldier's Reunion in Newton; an artistic spirit is reflected in our furniture artisans, music, quilting, pottery, etc.

Catawba County is a member of the regional Western Piedmont Council of Governments. 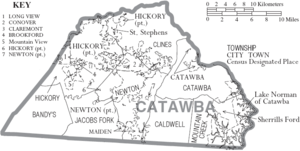