Currituck County is a county located in the U.S. state of North Carolina with its county seat at Currituck.Template:GR The county is part of the Hampton Roads metropolitan area based around Norfolk, Virginia.

Currituck was formed as early as 1668 as a precinct of Albemarle County. The name is "traditionally said to be an Indian word for wild geese; Coratank."[1] It is in the northeastern section of the State and is bounded by the Atlantic Ocean, Currituck Sound, Camden County, Dare County and the state of Virginia. The present land area is Template:Convert and the 2000 population was 18,190.[2] Currituck Court House, mentioned as early as 1755, was the name of the county seat. Today the words "Court House" have been dropped and only Currituck is used as the town name.

Currituck is the 72nd fastest growing county in the United States according to a report by the U.S. Census Bureau.[3]

Currituck County is one of only two counties (the other being Camden) in North Carolina that has no incorporated towns or cities.

Currituck County is a member of the Albemarle Commission regional council of governments.

The county is run by elected county commissioners.

Pine trees are common in Currituck County, like these in Mackay Island National Wildlife Refuge. 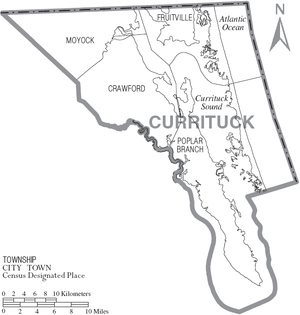