Jackson County is a county located in the southwest of the U.S. state of North Carolina. As of 2000, the population was 33,121. Since 1913 its county seat has been SylvaTemplate:GR, replacing Webster.

The county was formed in 1852 from parts of Haywood County and Macon County. It was named for Andrew Jackson, President of the United States from 1829 to 1837.

Jackson County is a member of the regional Southwestern Commission council of governments.

Jackson County contains a portion of the Qualla Boundary, a tribal reservation for the Eastern Band of Cherokee Indians, which is subject mostly to tribal/federal laws rather than county or state laws. 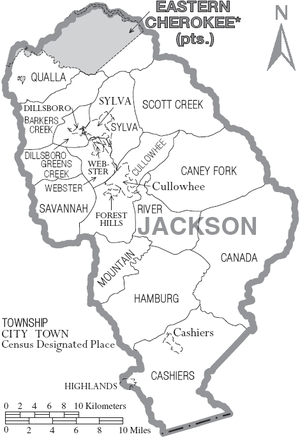 Jackson County is serviced by three main roads: The Great Smoky Mountains Expressway runs East-West across the northern half of the county and connects the county seat of Sylva to Waynesville and Asheville in the east and Cherokee, Andrews and Murphy in the west. North Carolina State Highway 107 connects Sylva and Western Carolina University to Cashiers in the south. U.S. Highway 64 traverses East-West across the southern part of the county connecting Cashiers to Brevard in the east and Highlands in the west.

Norfolk Southern Railway operates a portion the Murphy Branch through Jackson County, providing a rail connection with the rest of the country. In Sylva, NC, Norfolk Southern connects with the Great Smoky Mountains Railroad. Interchange between the two lines is handled near Jackson Paper Company. Great Smoky Mountains Railroad operates the rest of the Murphy Branch from Dillsboro, NC to Andrews, NC.

The county contains one airport, the Jackson County Airport located one mile (1.6 km) east of Cullowhee.

Buff Creek Baptist Church is located just outside of Sylva. It is a small, conservative church with a family atmosphere. Church Website

Grace Community Church is a new church with casual, contemporary worship that meets at the Sylva Inn. Rich Peoples is the church's pastor. Church Website

Dick's Creek is a road and community just west of Dillsboro, North Carolina, off of highway 74 in Jackson County. Just over Template:Convert up the road on the right is historic Dick's Creek Baptist Church built in 1903. Until 1946 this church was used as both a church and school. As of 2009, services are still held.

LifeWay Community Church is located in the heart of downtown Sylva. A non-denominational church, LifeWay meets weekly on Sunday mornings at their main campus and has small group meetings on Wednesday evenings throughout Jackson and Swain counties. Church Website

Several movies have been filmed in the county including the 1993 blockbuster action-adventure The Fugitive starring Harrison Ford and Tommy Lee Jones, the 1972 drama Deliverance and the 1996 comedy My Fellow Americans starring Jack Lemmon and James Garner.