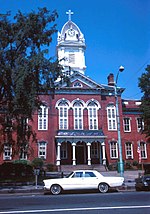 Union County is a member of the regional Centralina Council of Governments.

In 2010 Union County was ranked number 16 on The Daily Caller's list of America's 100 most conservative-friendly counties.[2]