Transylvania County is a county located in the U.S. state of North Carolina. As of 2000, the population was 29,334. Its county seat is BrevardTemplate:GR.

The county was formed in 1861 from parts of Henderson County and Jackson County. Its name is derived from the Transylvania Company and has Latin origins: trans ("across") and silva or sylva ("woods").

Transylvania County is a member of the Land-of-Sky Regional Council of governments.

According to the U.S. Census Bureau, the county has a total area of 381 square miles (986 km²), of which, 378 square miles (980 km²) of it is land and 2 square miles (6 km²) of it (0.57%) is water. There are over 250 waterfalls in the county, partially due to the fact that Transylvania County is the wettest county in the state. This is contrasted with Buncombe County, which is thirty miles northeast of Transylvania County receiving the lowest precipitation. The Blue Ridge Parkway traverses through parts of the county, affording spectacular views of the Appalachian Mountains, which reach over 6,000 feet elevation in the county. The highest point, Chestnut Knob (6,025 ft.), lies northwest of the county seat Brevard. 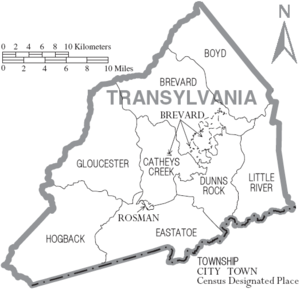