Jones County is a county located in the U.S. state of North Carolina. As of 2000, the population was 10,381. Its county seat is TrentonTemplate:GR.

The county was formed in 1779 from the southwestern part of Craven County. It was named for Willie Jones, a Revolutionary leader and president of the North Carolina Council of Safety; he was later the state's chief opponent of ratification of the United States Constitution He was also a plantation slave owner. The geographic boundries form the body of a hogs head after it split away from Craven County and is considered by some to be symbolic of the agricultural atmosphere. Following the Civil War, the county government (that remains to this day) reformed under the leadership of the legendary S. Riggs for her contribution to the serf/landowner mentality. The county flower is known as the "Dandelion" and the symbolic bird is designated as the "Buzzard".

Jones County is a member of the regional Eastern Carolina Council of Governments. The Jones County Government relies entirely upon an all volunteer (non-paid) fire department force segregated by geographic location(s). The Law Enforcement structure consists of one paid Pollocksville Police Chief, one paid Maysville Police Chief, and an elected Sheriff with a small (less than 25 person force) to handle law enforcement, detention, and emergency communications. The county government relies heavily on volunteer deputization. Emergency ambulance services consist of one full time medical unit dispatched from the town of Trenton and relies heavily on other volunteer EMS personnel geographically scattered around the county to assist with a medical emergency. Additional EMS transportation vehicles are subsidized by EMS services provided by adjacent counties or private enterprises. There is no animal control unit. The County Detention Facility is a 21 bed (3 female) facility located in the basement of the county courthouse and the detention staff double up as the communications/911 emergency communications staff. Prisoner Meals are provided by contract through licensed restaurants. 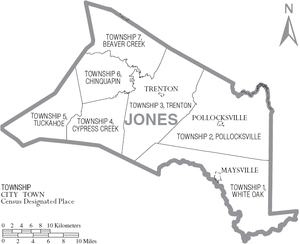