The county was formed in 1764 from parts of Bladen County and New Hanover County. It was named for the colonial port of Brunswick Town (now in ruins) which was itself named for Duchy of Brunswick-LÃ¼neburg; at the time held by the British kings of the House of Hanover.

Brunswick County is a member of the regional Cape Fear Council of Governments. 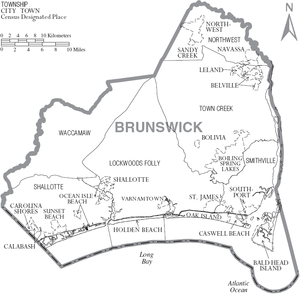