Northampton County is a county located in the U.S. state of North Carolina. As of 2000, the population was 22,086. Its county seat is JacksonTemplate:GR.

The county was formed in 1741 from Bertie County. It was named for James Compton, 5th Earl of Northampton.

In 1759 parts of Northampton County, Bertie County, and Chowan County were combined to form Hertford County.

Northampton County is a member of the regional Upper Coastal Plain Council of Governments.

It is part of North Carolina's 1st congressional district, which has a Cook Partisan Voting Index of D+9 and has been represented by a Democratic Congressman since 1899. It is currently represented by G. K. Butterfield. 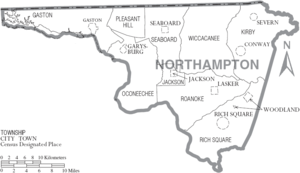