Lee County is a county located in the U.S. state of North Carolina. As of 2000, the population was 49,040. Its county seat is SanfordTemplate:GR.

The county was formed in 1907 from parts of Chatham County, Moore County and Harnett County. It was named for Robert E. Lee, commanding general of the Confederate forces during the American Civil War.

Lee County is a member of the regional Triangle J Council of Governments. The county is governed by a seven-member board of County Commissioners, elected at large to serve four-year terms. Terms are staggered so that, every two years, three or four Commissioners are up for election. The Commissioners enact policies such as establishment of the property tax rate, regulation of land use and zoning outside municipal jurisdictions, and adoption of the annual budget. Commissioners usually meet on the first and third Mondays of each month. 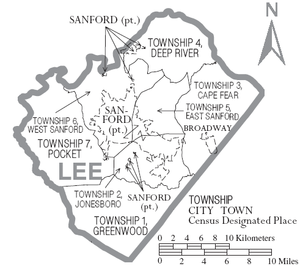