Bertie County (pronounced BURT-TEE) is a county located in the state of North Carolina. As of 2000, the population was 19,773. Its county seat is Windsor.Template:GR

The county was formed as Bertie Precinct in 1722 from the part of Chowan Precinct of Albemarle County lying west of the Chowan River. It was named for James Bertie, his brother Henry Bertie, or both, each having been one of the Lords Proprietors of Carolina.

Bertie County is a member of the Mid-East Commission regional council of governments.

A good way to raise the ire of a Bertie County resident is to mispronounce the county's name. Locals stress both syllables equally, with the "T" sound present in both (BURT-TEE). It's a good way to tell whether someone is native or visiting from afar. The common mispronunciation is like "Birdie." 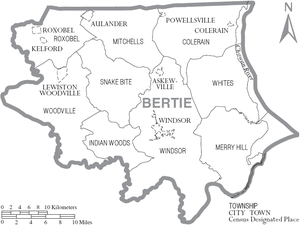