Pamlico County is a county located in the U.S. state of North Carolina. As of 2006, the population is 13,097 . Its county seat is Bayboro.

The county was formed in 1872 from parts of Beaufort County and Craven County. It was named for Pamlico Sound, which adjoins it.[1] Pamlico County remains rural in character and flavor, although the last decade has brought a good deal of residential development, largely the result of northern retirees and investors attracted to the many miles of waterfront property. The county is anchored on the east by the village of Oriental, a popular waystation for boaters traveling the Intra-Coastal Waterway, and New Bern (just across the border in Craven County) to the west. New Bern is "the primary trade area" for Pamlico County.

The county is divided into five townships, which are numbered but not named. 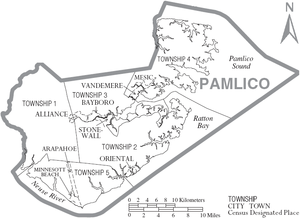